The St Ayles Skiff has been officially launched at Anstruther, where the harbour was sunny and still yesterday, as it was down here in the South. Methil Sea Cadets took her out again (above), with builder Alec Jordan in the bow.
Chris Perkins came over from Scotland's left coast to take the pictures (he is a rather good snapper) and the designer, Iain Oughtred, put hand to oar (at number 3, below) and was, says Alec, very pleased with how it came out.

Several groups who have ordered or are interested in kits for the St Ayles Skiff also came along, including one of the groups from Portobello, in Edinburgh, pictured below. Two international orders, from Germany and the Netherlands, are already in the pipeline, showing how fast the idea has spread. 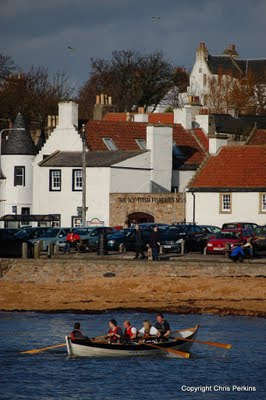 The only substantial modification being considered is a wider spacing between the thwarts to reduce the amount of oar-handle-banging-person-in-front-syndrome (I'm sure the Germans have a word for this). Alec says the length of the boat will not be increased because at least two strakes would need to have three scarfs instead of two as a result, which would violate the 'keep it simple' principle. Still, speaking as a larger than average rower, more leg room is always better, I feel.
Posted by Chris Partridge at 14:32

Bravo!
Thank you Chris (and Chris, and Alec and Iain, et al).
I'll bet three rowers with two oars each would be faster than four. (more room to flail about)
Is that against the rules?
doryman

I've been wondering if rowing 'randan' would be fastest - three oarsmen, rowing one oar at bow and stroke, and sculling with two oars in the middle. The Cornish do this a lot.

What about the other way round but with four rowers? Sculling bow and stroke and two oarsmen, rowing with one oar each, in the middle. Does anybody do it like that?

More oars in the water don't necessarily mean more power, but it would be interesting to try all the possible configurations in a boat like the St Ayles skiff.

An interesting idea, and the St Ayles Skiff has kabes on both sides so it can be rowed, sculled or whatever as required. I don't think sculling at each end and rowing in the middle is a traditional arrangement but I could be wrong. The reason for randan is it puts the same number of oars on each side even with three oarsmen, so it is good for short boats. If you reverse the arrangement, you are back to four oarsmen and you might as well have one oar each, if you see what I mean.

Does anyone else feel she looks just a little down at the stern with the cox there? Moving the thwarts further apart and forward might just lower the bow a bit?

If the boat is to have the same crew all the time, then fixed thwarts are a simple idea, but for crew of varying weight and size, adjustable thwarts make sense. I thought she looked a little down on her waterline all around, which is what prompted me to suggest three crew. The boat would ride higher, have more room for the longer stroke I prefer, and (just a prejudice) two oars feel better than one. But then I'm not on the team, just a wannabe.
doryman