Boating on the Box

You can tell the weather has been horrible - both this blog and intheboatshed.net have been watching the telly. Gavin links to a very splendid Channel 4 series that I missed, called Classic Ships, available to watch on 4oD. This episode focuses on pleasure craft, including the Thames skiffs and slipper boats that my grandparents used to have when I was a kid. 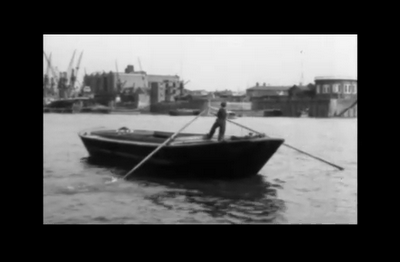 One clip stood out - a Thames bargee rowing a huge dumb barge with a pair of giant sweeps at Rotherhythe. He wasn't really powering it, of course, as the tide would have been doing most of the work, but using the sweeps to keep the thing going in the right direction would have been hard enough. I was standing on London Bridge once, watching a barge practicing for the barge races. Two blokes were rowing and another was steering. The tide was flowing very fast and they were swept against one of the piers of Cannon Street railway bridge. Being empty, the barge sounded a mighty DOINGGGGG that must have been heard in Croydon. You can see the dent it made in the bridge to this day. 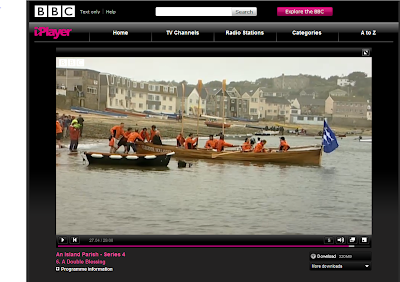 I don't normally watch An Island Parish. the BBC's reality show about the Scilly Isles, but last night's episode featured the launch of a new pilot gig for a Dutch club. It is available on iPlayer, which has the big advantage that you can fast forward over the stuff about the lovelorn vet and the visiting bishop.
The local Methodist minister blessed the boat with a lovely Celtic benediction, and even spoke it in Dutch, one of the world's least pronouncable languages.
There was a thoughtful discussion of whether a religious ceremony is necessary in these secular times. I think it is purely because every community, including rowing clubs, needs ritual at certain points and a religious service fits the bill whether you believe in it or not. As the scientist Lord May said on Desert Island Discs when asked why he goes to church despite being an atheist: "I believe in following the rituals of my tribe."
Posted by Chris Partridge at 09:30

I missed that series on classic ships - when was it broadcast?

Have you ever read "Mate of the Caprice"? Its all about life on one of the Thames barges in the 1930s and describes how they could manoeuvre the boats without engine.

I don't know when it originally went out, but it was narrated by John Peel who died in 2004 so it was some time ago. Nice of C4 to keep it on replay, I think.
I haven't read Mate of the Caprice. It is by Gordon Brown, which is a bit of a turn-off even though it can't be our adored leader. I have read a couple of Bob Roberts' books on the same topic, also very good.

"one of the world's least pronouncable languages."?
Is it really that bad? Funny, I'd never have guessed. :))
BTW, at KWV De Kaag, we're not yet in winter mode and still rowing our whalers and gigs.

My brother spent a year in Amsterdam trying to learn it and came away able to order beer and little more. Of course, part of the problem was that the Dutch always insisted on practising their English rather than teaching him to speak Dutch.

BTW no stop to rowing here either, just a hiatus for storms. One of the benefits of living this end of the Gulf Stream is we don't get that solid water stuff.