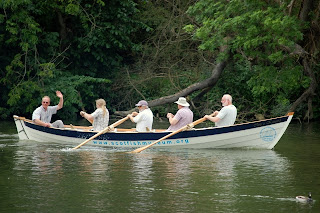 The prototype Scottish Coastal Rowing boat Chris O'Kanaird was a star performer at the Beale Park Thames Boat show yesterday, appearing on the Water Craft stand with the new Cornish pilot gig Black Ven.
The UK Home Built Boat Rally was also at the show in force, so it made sense to put together a crew. Alec Jordan, founder of the UK-HBBR and devisor of the Scottish Coastal Rowing project, coxed and a fellow Scot whose name I am ashamed to say I have forgotten went stroke. Richard Rooth and Tim O'Connor were 3 and 2 respectively, and that's me in the bow.
It is a tribute to the kindly qualities of the boat that we managed to get a good beat up right from the start. The close spacing of the thwarts (lengthened in production boats) imposes a short, choppy rowing style but we soon got the hang of it and the hull slips quickly along. In fact, we got filled with enough hubris to line up against Black Ven and her experienced Lyme Regis crew.
This was absurd on all fronts, of course. They were twice as long and half as old as us, and many of them had visible waists. But the light boat meant we had a slight advantage of power-to-weight ratio and we started well. It took Black Ven all of 10 or 15 seconds to overhaul us and disappear downriver.
Anyway it was huge fun and that is what rowing a St Ayles skiff is all about. She is at the show again today and apparently many people have travelled to Pangbourne specifically to see her.
Thanks to Chris Perkins for the picture - more from him here.
Posted by Chris Partridge at 08:03

"Hubris" - funny, I don't recall seeing that on the menu in the beer tent when we had the HBBR Rally there just before the more energetic went a rowing. We were filling ourselves with lots of other things though – as an experienced oarsman you could perhaps advise on the wisdom of the crew taking on quantities of Pie and Mash washed down with Old Father Thames just before a sprint?

Real Greek-style hubris is a plate of moussaka washed down with four pints of retsina, but sadly it has been years since I could swallow that at lunch without a long siesta. I can still manage pie and mash and shandy, however.

Sorry to miss it when passing through Pangbourne.

Sounds like they could have over-hauled us in our slow motor boat.

You bet your sweet bippy we would have overhauled you, and the pilot gig would have left you standing.
Pity you missed the show, it was fun.