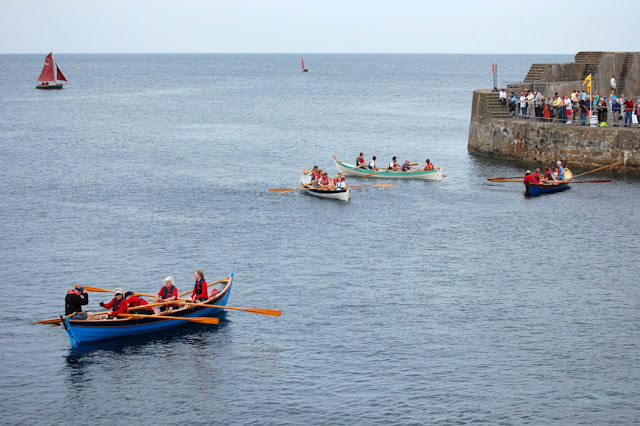 At last year's Portsoy Traditional Boat Festival, Scotland's biggest gathering of lovely old boats, the Scottish Coastal Rowing project was just a project. Iain Oughtred hadn't even finished designing the boat.
Last weekend, no fewer than six St Ayles skiffs were raced at Portsoy, with the prizes being dished out by Scotland's First Minister, Alex Salmond.
The sun shone and everyone had a brilliant time, apparently. I only wish I could have been there, but luckily Chris Perkins was, taking a gazillion great snaps which can be viewed here. Chris reports: 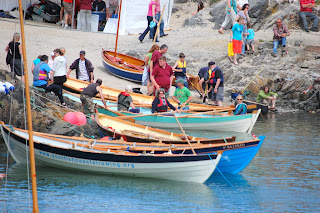 "Portsoy was fantastic - the skiff racing put a real buzz into the event.
I learned a lot about effective oars and steering - the most consistently good were Port Seton with shorter oars and an appreciably higher stroke rate - the Saturday final was between two Port Seton crews, so to even up the odds they were put in borrowed boats, a scratch crew took out the Port Seton boat for a recreational row. Even with a 50 yard handicap and an extended trip round both competing teams marker buoys the Port Seton boat came in shortly after the winners, handsomely beating the team in borrowed 'Ulla' - Port Seton have a seriously fast and efficient set up. Ullapool didn't do well, winning only one heat - the constant reworking of the oars and the steerboard are going to need further thought." 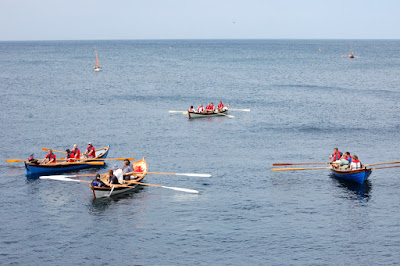 Viv Perkins videoed the races, and here is one of the clips. Note the accompanying sound track, which records the sort of audience participation that wins races.

Posted by Chris Partridge at 15:51