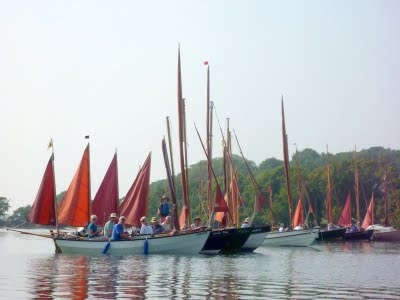 I got Snarleyow out yesterday, her first outing on Chichester Harbour for months due to the refurb and 'training' for the Great River Race. It was a fabulous day for rowing, sunny, windless and high tide at noon. I put in at Itchenor and ambled up to Fishbourne, impressing myself with the power I can put on after simply going out three times a week instead of twice. Must try and keep it up.
A fleet of Drascombes was milling about at Dell Quay in the light breeze. Eventually they rafted up for lunch, a rather impressive sight. They were the Drascombe Association, a friendly bunch. The skipper of the boat at the front told me his boat was horrible to row, but it looks as though it would be OK with its slim lines and transom well out of the water. I must try one.
Posted by Chris Partridge at 08:53