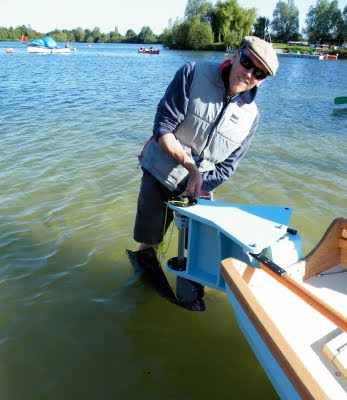 Paul Smithson, builder of the Welsford Walkabout that I sailed in at Cobnor a few weeks ago, loves sailing gadgets and has come up with an extremely novel sculling device which got its first trial at the Home Built Boat Rally meet at Cotswold Water Park over the weekend.
It works by waggling a plate like a fishtail. Power is provided by a lever mounted amidships and connected by a rod to the stern, so the sculler can sit facing forwards.
As a furniture designer and maker, Paul has incredibly high standards of workmanship and the prototype is a gleaming marvel of engineering, the complete opposite of the lashup I would have produced 'just to see if the idea works'.
The first trials showed definite forward progress but the device has the drawback that it can't steer the boat, so direction has to be set with an oar. It is also not as fast as a good pair of traditional blades. It will be very interesting to see how the device develops.

Posted by Chris Partridge at 08:50

Interesting. It looks kind of like Harry Bryan's fin drive, which is pedal-powered:
http://www.harrybryan.com/harrybryan/images/plans/4.finboat.JPG