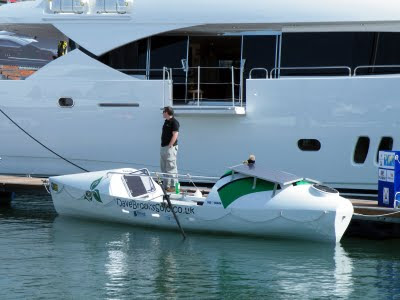 Contrasts at the Southampton Boat Show. A floating richard-attractor is the background to a rowing-for-pain machine. Dave Brooks is aiming to be the first person to row the Atlantic and Pacific oceans, and very good luck to him though I personally think he is deranged. The bloke in the picture is not Dave but someone else who is accompanying the Woodvale Challenge 2009 as part of a ten-man crew in an attempt on the Atlantic rowing record. He is deranged too (in the nicest possible way). 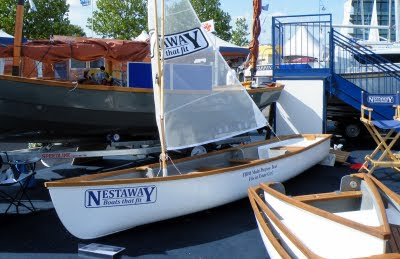 Ian Thomson of Nestaway Boats exhibited his three-part rowing boat that fits in the back of an estate car. Ian says it fits nicely in a Focus, which is good for me as that is the model I happen to own, but not in a Range Rover, oddly. It all depends on the aperture of the tailgate, apparently.
Ian is experimenting with outriggers that will hook over the gunwales to allow rowers to use longer oars and get real speed out of the long, thin hull. He has also developed a sailing rig that will appeal to diehard sailors out there. 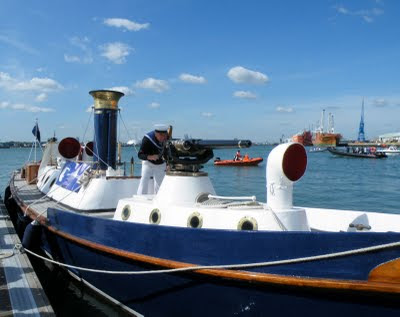 I have always had a weak spot for steamboats, and Steam Pinnace 199 presses all my buttons. Built in 1911 by Samuel White's yard in Cowes, Isle of Wight, she was used as a guardboat for a dreadnought and became an admiral's barge in 1918.
The Hotchkiss three pounder gun is the same model as installed originally, but was dredged up by a Portsmouth fishing boat in the 1960s and dumped at the back of a yard until it was recognised and recovered for restoration as 199's armament.
Posted by Chris Partridge at 23:27

He'll have a way to go, just to catch up to Roz Savage ( another Brit) who just completed her 3rd stage of an Atlantic/Pacific row in a very similar boat.

Dave is planning to do the two oceans in one expedition, rowing through the Caribbean and the Panama Canal, whereas Roz has done the Atlantic and Pacific separately.