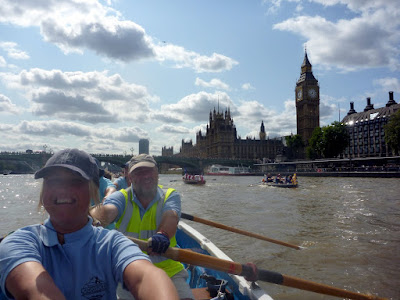 This shot is the one that says 'Great River Race' for me. Mabel hammering upriver past the Houses of Parliament. 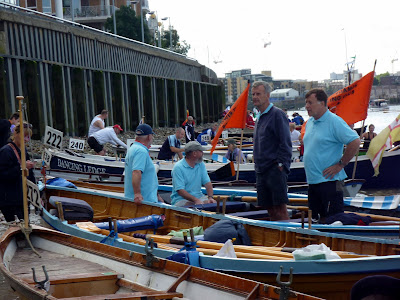 There was a good deal of hanging around before the start, with the boats sitting on the foreshore at the Isle of Dogs. This is part of the crew of Gladys waiting. 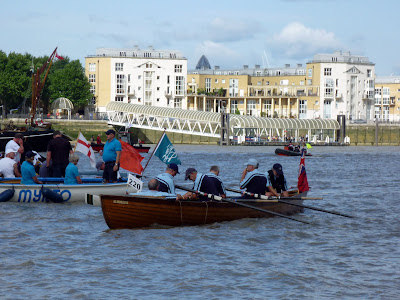 Here is the Solent galley Bembridge drifting down to the holding area before moving up to the start line. 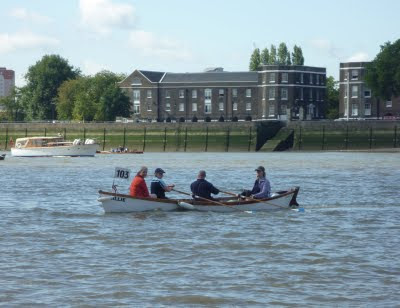 The Teifi skiff Millie looks very small in a big river as she heads downriver for the holding area. That's the old naval victualling yard in Deptford in the background.

15 Seconds, a Salter skiff, was already out of the water and ready to go home by the time Mabel arrived at Ham.
UPDATE
Langstone Cutters super-vets (over 60s) in Gladys won their class for the fifth successive year. 15 Seconds won the women's trophy, and Millie won the veteran women's class. Bembridge put up a great fight but didn't win silverware - but next year they will be truly acquainted with their boat and the opposition had better watch out. Mabel finished.
Huge congratulations to all.
There were, of course, one or two other clubs at the event and I'll be posting more later. Meanwhile, there is a great selection of pictures and all the results at the Great River Race website.
Posted by Chris Partridge at 12:04

Many congratulations on completing the GRR - it was an amazing spectacle seeing such a mass of boats rowing upstream.

My niece wasn't feeling too good but she cheered up a bit watching you and the others row by so thanks for that.

In view of your stated aversion to competitive rowing does this episode mark a change of heart? Congratulations anyway, not bad for a pleasure outing.

Thanks JP, and I'm glad your niece was bucked up! Where were you watching? We got some cheers for Mabel from unfamiliar voices, and it was really encouraging.
Chris - I have slipped a bit into competition due to joining Langstone Cutters, but the GRR is not like the boat race, much more relaxed and fun, and you can take part without pressure to come first, which is just as well because we sure as h*ll didn't.

It's always great to see the Langstone Cutter crew's up here in the big smoke, Every year it seems they are more & more of you.
For the crew of Trinity House rowing (Trinity Tide) we may be some of the random voice's you hear along the course.
Looking forward to rowing against Mike Gilbert in the crew of Bembridge your Solent Galley in Cork next week.
Best of luck for this years (2010) Great River Race.