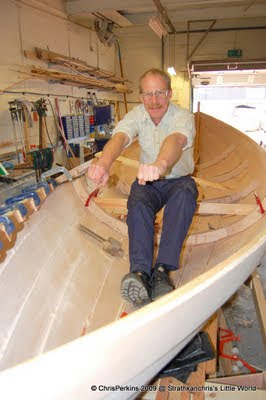 Here is boatbuilder Alec Jordan testing the rowing positions for the St Ayles Skiff, the prototype traditional rowing boat for the Kingdom of Fife.
Getting the distance between the thwarts correct is vital if the boat is to be successfully raced by community crews whose heights may range from quite small to average (6ft 5in). Measuring old boats is little help here as heights have significantly increased since the arrival of proper sustaining food in modern times (hamburgers and pizza).
Boatbuilder Chris Perkins writes: "The trial of seating positions by Alec was very useful - the cox is going to have to be a pretty short lightweight - there is not a great deal of room in the stern but we are now comfortable that the spacing of the thwarts is going to work well." The only modification of Iain Oughtred's design has been to simplify the inwales. "Some deep thinking is going on during the fitting out to help make this part of the build as easy as possible for novice builders," Chris writes. "We have already partly moved away from Iain's glorious sweeping taper of the inwale, planing that down on all three laminations has proved very time consuming, the twisted grain in larch hasn't helped as deep cuts tend to tear out so fine cuts and very keen plane irons are the order of the day. Our modification does recognise tradition as study of a traditionally built Fair Isle Skiff shows - I just wish I had taken far more snaps of 'Aluna Ivy' at Portsoy this year! If only I had known what I would be getting involved with!"
More details and pics at Chris's blog.
Posted by Chris Partridge at 22:31